April 23, 2019 (Framingham, MA): For the sixth year in a row, teams from Framingham High School and Walsh Middle School are attending the VEX Robotics World Championships which take place April 24th - 27th. High school team 9421X, The Intangibles, and middle school team 9791C, Walsh Roboty McRobotface, will travel to Louisville, Kentucky this week to compete with and against the best robotics teams in the world. This is the fifth appearance by each specific team at Worlds. 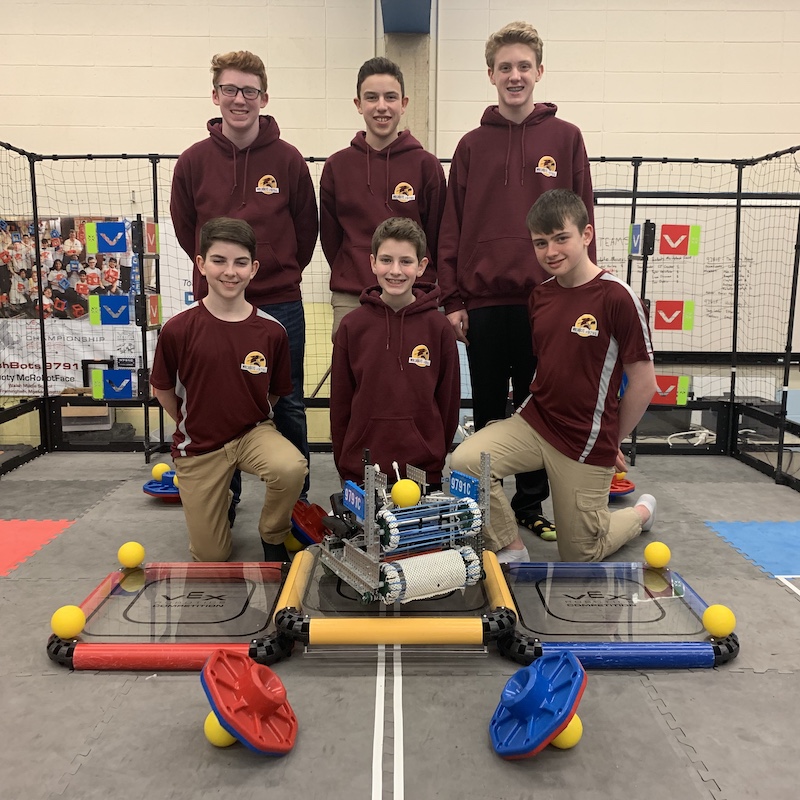 Once they qualified for Worlds, 9791C team members CJ, Liam, Tyler and Zac knew they needed more help, so they added Brady and Ryan, who were on Walsh Team 9791B. They were selected for their competitive spirit, problem-solving skills, knowledge of robotics, and commitment to the club. They may not be on the Drive Team, but will serve as an experienced scouting and pit crew.

“Our combined abilities help us be the best team that we can be,” they said. “We keep a razor-sharp focus on the robot and game strategy, identifying robot’s software and hardware issues and finding solutions. In addition, our personalities keep the team in a good mood and we are great at getting along with other teams.”

While the high school team, 9421X, did not qualify directly for the World Championship, their robot driving and programming scores allowed them to secure a spot. When asked about their strengths, Framingham High School students focused on programming, saying, “It was our programming skills win at the Massachusetts Championship that qualified us for Worlds the first time and each subsequent year, it has been our ability to program the robot that has helped us get to Worlds.”

FHS team 9421X is made up of 10th graders Josh Halberstadt, Kiana St.Cyr, Makala St.Cyr and Maddie Wissler, 11th grader Lara Scaria and Liam Neal Reilly. In addition, to help with scouting and the pit, the team is bringing 11th grader Arjun Ramachandrula, who was part of team 9421V during the competition year. This will be Lara’s first time attending Worlds, the second time for Josh, Kiana, Makala and Arjun, the third time for Maddie and the fifth time for Liam. All but Josh attended Worlds on teams from Walsh Middle School.

The World Championship is the culmination of more than 11,000 teams competing in more than 900 events in 45 countries. This year’s game, Turning Point, is played on a 12’x12’ square field where two alliances of two teams each compete in matches with a 15 second Autonomous Period followed by a one minute and forty-five second Driver Controlled Period. The object of the game is to attain a higher score than the opposing Alliance by High Scoring or Low Scoring Caps, Toggling Flags, and by Alliance Parking or Center Parking Robots on the Platforms.

This will be the fifth year in a row 9421X and 9791C have been to Worlds and the sixth that a Framingham High School and Middle School team has been to Worlds. Framingham High School is the only public high school in Massachusetts (and one of two in all of New England) that has attended The VEX Robotics World Championships six out of the last six years. Walsh Middle School is the only public middle school that has done so as well.

Framingham High School Robotics' primary sponsor for the last three years has been the Bose Corporation. As they have told us, "We recognize the importance of supporting the communities in which our buildings are located, and want to engage the students who are involved with STEM based activities as they are very important to our workforce at Bose."

In addition, FHS receives support through the Framingham High School Foundation, Quinsigamond Community College and Middlesex Savings Bank. This year they also received considerable support through donations made in memory of William Howard, the father of two FHS alumni and former teacher, who had a passion for science and creativity.

The FHS and Walsh Robotics Programs are grateful for community support, including individual and small business donors, all of which has been vital for this STEAM-based after school activity. Likewise, our community and students are fortunate to have the guidance and leadership of the Robotics Programs Advisors Pascal Chesnais (Walsh Middle School) and Peter Erbland (Framingham High School).